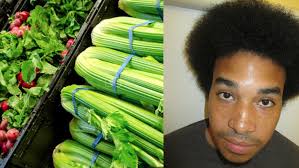 A man in Virginia, United States, is facing charges after he allegedly grabbed produce at a Manassas store, pulled down his pants and rubbed the food items on his bare buttocks.

The suspect then allegedly put the tainted produce back on the shelves, according to The Huffington Post.

Michael Johnson, 27, was arrested at the Giant Food Store after an employee called 911 about destruction of property. The employee told officers Johnson was allegedly seen “picking up produce, pulling down his pants, rubbing the produce on his buttocks, and replacing the produce back on the shelf,” according to a police report obtained by The Smoking Gun.

Johnson was arrested inside the supermarket and charged with two misdemeanors: indecent exposure and destruction of property. According to the police report, store employees had to destroy several pallets of produce presumably tainted by Johnson’s buttocks.

Authorities say they haven’t determined a possible motive. Although a police spokesperson told NBC Washington she did not know what type of produce the man allegedly defiled, a police report mentioned it was fruit. Johnson was later released on his own recognisance.