Police arrest 20-year-old, one other for kidnap in Imo 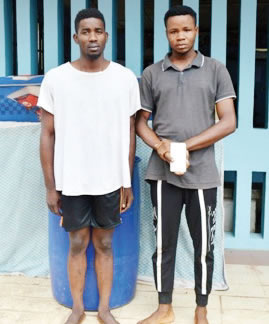 THE Imo State Police Command has arrested a 20-year-old-man, Victor Onumajuru, and his 25-year-old accomplice, Chibyke Chikere for allegedly raping a 19-year-old girl.

Parading the suspects, the state Commissioner of Police, Dasuki Galadanchi, revealed that the suspects abducted and raped their victim on August 29 at their hideout.

The police boss disclosed that on receipt of intelligence, the operatives of the command’s Anti-Kidnapping Unit swung into action and arrested the suspects.

The CP said, “On August 29, a gang of five men kidnapped the victim and took her to their hideout.

“The operatives of the Command’s Anti-kidnapping Unit acted on a credible intelligence, rescued the victim and subsequently arrested the suspects in possession of the victim’s GSM handset.

“The suspects unlawfully had carnal knowledge of the victim while in captivity. They have made useful statements and they are helping the police in the investigation process.

“The victim is a 19-year-old girl from Mbieri in the Mbaitoli Local Government Area of Imo State. One handset belonging to the victim was recovered from the suspects as an exhibit.

“It is very unfortunate that children who ought to give their lives good meaning by either going to school or learning a trade are engaging in this kind of crime. My command will not spare any lawbreaker. I want to assure Imo people that we will continue to close in on the bad elements.”

Galadanchi, however, promised to prosecute the suspects to serve as deterrent to others.