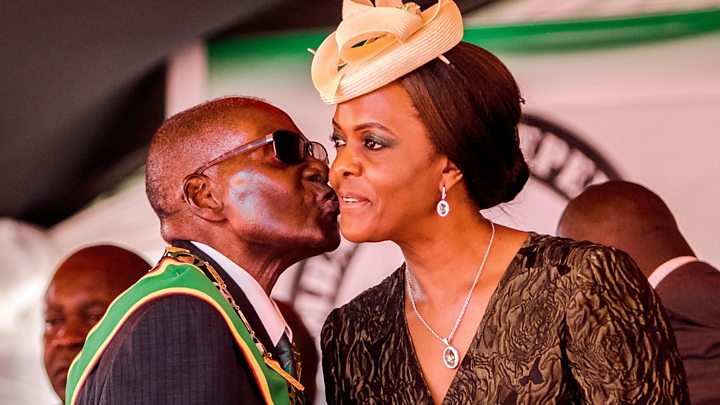 Former Zimbabwean president, Robert Mugabe, has revealed how his love affair with his wife, Grace started.

Mugabe, while speaking at the funeral of his mother-in-law, revealed that he just grabbed and kissed his then secretary, Grace Marufu, and it marked the beginning of their romantic relationship, reports New Zimbabwe.

At the funeral which held at the couple’s Blue Roof Harare home, Grace looked surprised when the 95-year-old shared that he just kissed her and decided she loved him too because she had not resisted his overtures.

Mugabe and Grace started dating while Mugabe’s first wife, Sally was struggling with a terminal illness.

“Yes, we got involved when Sally was still alive, I had to,” Mugabe told mourners.

“Grace and I never dated either, I was just introduced to her and I said to myself she is a beautiful girl.

“So she came as a secretary and they were many of them, I just looked at them and then it was love at first sight with Grace.”

He added; “Then I said to her one day, I love you and she didn’t respond.

“I then grabbed her hand and I kissed her. She didn’t protest or refuse and then I said to myself, that she has accepted to be kissed, it means she loves me.”

Mugabe’s daughter Bona was born two years before his first wife, Sally died in 1992. Grace and Mugabe went on to have two more children.

Mugabe ruled Zimbabwe since independence in 1980. He was forced out of office last year in a military coup.

GraceLifestyleMugabe reveals how affair with wife