The family members of Damilare Taiwo, an Economics student at the University of Lagos, Akoka, have been thrown into mourning following his death a day after he resumed for training at the Nigerian Defence Academy in Kaduna State.

The army authorities reportedly said the 20-year-old slumped and died during a training session last Tuesday.

But the family said that the circumstances surrounding Damilare’s death aroused suspicion, claiming that he was beaten to death.

A brilliant student with a CGPA said to be in the range of Second Class Upper Division, the native of Ile-Ife, Osun State had always wished to be an accomplished army officer.

He had applied for the Regular Combatant Course of the NDA in 2015 at 17, but did not make the list of the successful candidates. Undeterred by hard luck, promising Damilare reapplied for the programme a few months ago.

He was shortlisted on August 8, 2018, among the 10 selected candidates from Osun State for the 70 Regular Combatant Course, coincidentally at a time when he was rounding off his first degree project.

On Saturday, August 25, his father saw him off to Ikorodu Garage – some distance from their residence – beaming with joy that the first child of the family was about to embark on a journey to attain enviable ranks in the profession he had been nursing for years.

“He left Lagos for Kaduna that Saturday, a day after he concluded his project in school, and reported at the training camp on Monday, August 27,” the deceased’s father, Mr. Taiwo Oyedele, told our correspondent.

Narrating Damilare’s journey through life, Oyedele said his death came to the family as a rude shock.

The father recalled, “He finished his secondary school education in 2014 and gained admission to UNILAG the same year to study Economics. He was just 20 years old.  He just completed his project.

“When he wanted to leave for Kaduna that Saturday, I advised him to be a good ambassador of the family and prayed for him. He was an easy-going child. He had always wanted to be a soldier.

“In one of his pictures on Facebook, he edited the image of the late Gen. Murtala Muhammed in the N20 note and replaced it with his picture. That is to tell you the passion he had for the Force and how far he wanted to go. 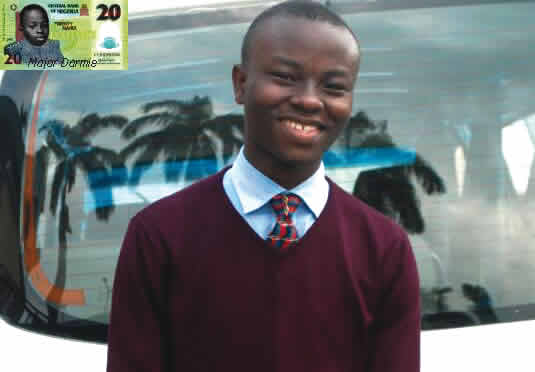 “He had been showing interest in the army since 2011 when he was 13. It is so unfortunate that he could not accomplish his mission.

“The army sent some officers to us last Thursday to tell us about his death. They told us that he collapsed during a training session on Tuesday (August 28).”

Oyedele, a building material dealer, described his son’s death as devastating to the family, lamenting that they had invested so much hope in him. For years, the businessman would battle to get over the heartache of the irreparable loss.

A devout Christian, Damilare was fondly addressed as ‘Pastor Dammy,’ ‘one of the God’s Generals,’ ‘Woli agba,’ among other religious nomenclatures.

“There is no way I can forget him. He was my first child. He was very devoted in churches, both at the community and in his school. It is only God that can comfort me. He was a role model to his two siblings.

“He was a cool-headed person. If he was not reading, he was surfing the Internet, studying the Bible or helping his mother in her shop,” the father added in a hushed tone.

While Oyedele managed to control his emotion, his wife, was inconsolable, crying uncontrollably. She had passed out on hearing the sad news and did not regain consciousness until she was taken to a hospital.

The intensity of her wailing during an encounter with our correspondent six days after the incident showed that the family had, indeed, lost an illustrious son.

She said mournfully, “Won ti kan mi leyin okan (They have broken my canine). I learnt my son was beaten to death whereas the army told us he fell and died.

Damilare’s younger brother, Moses, explained that his death was painful, noting that he died with many beautiful plans he had for the family.

“There were a lot of promises. He personally promised to be giving me N10,000 out of his salary every month,” he said.

Moses, who also claimed his brother died under questionable circumstances, urged the military authorities to conduct a postmortem on his corpse.

He added, “The military officers that came told us that he slumped and died. But some of his colleagues called and told us that he was beaten to death during ‘welcome home’ tradition at the camp. They said he was complaining that he was tired, but they did not leave him. The witnesses were afraid to speak out so that they would not run into trouble. We are going to take it up; we want to know the cause of his death.”

Meanwhile, friends of the deceased have paid glowing tributes to him on Facebook. One of his friends by the alias, Gallant Captain Whale, described Damilare as “his mentor.”

Whale wrote, “We love you but God loves you more. I won’t forget moments we spent together, my mentor right from school days. Even at death, you are brave. I love you brother from another mother. Rest in peace.”

To Okpewho Abednego Fikioghene, Damilare was “a leader” from whom he had learnt while they were in secondary school.

“It really touched me. Everyone said good (things) about you when you left. God loves you most brother.  Rest in peace,” another friend, Its Ba Smith, wrote.

The Course Adviser of the deceased at UNILAG, Dr. Ayodele Shittu, said he was Damilare’s confidant, adding that he was in his office to bid him farewell to Kaduna for the training.

Shittu said, “He was very humble and respectful. Academically, he was very sound and he would be finishing with a very good 2:1 (Second Class Upper Division). He had completed his project.

“The news of his death was very shocking. He came to my office while he was leaving. He hardly hid anything from me. I will miss him.”

Efforts by our correspondent to get the reaction of the NDA to the incident and the allegation raised by the family proved abortive.

When our correspondent contacted the Director, Defence Information, Brig. Gen. John Agim, he directed him to one Major Yahaya, who said he was no longer the NDA spokesperson.

Yahaya gave our correspondent the phone number of one Major Abdullahi said to be the current spokesperson for the academy. But when contacted, the receiver said it was a wrong number.

When our correspondent called Major Yahaya back, he insisted the number was correct.