The accident was said to have been caused by poor visibility as a result of heavy fog on the highway in the early hours of Monday just a few minutes before 7:00 am.

The accident which occurred at the junction of Aba-Odo on Oyo-Ibadan Expressway involved seven vehicles, comprising four trucks, one bus, one micro commercial cab and a private car.

At the scene, a combined team of the Federal Road Safety Corps (FRSC) led by the Sector Commander for Oyo State, Mrs Cecilia Alao, Nigeria Security and Civil Defence Corps (NSCDC) and men of Nigeria Police Force, were met at the scene, carrying out a rescue operation.

An eyewitness and resident of Aba-Odo community, Mr Seye Ayoade said the accident was due to over speeding coupled with the foggy weather.

“One Hyundai was coming from Oyo going to Ibadan. The car was speeding but when it got to Aba-Odo junction, it slowed down probably because of the heavy fog. A Micra cab, which was behind the car brushed the car that suddenly slowed down. But a truck, which was also on top speed, I think, could not see the front very well rammed into the cars and in the process, the Micra cab was also affected.

“In fact, the truck dragged the cab for about 200 metres before it fell down. Only the driver of the Micra survived, all the other passengers, including an official of NSCDC, were crushed, other trailers also rammed into the scene,” he said. 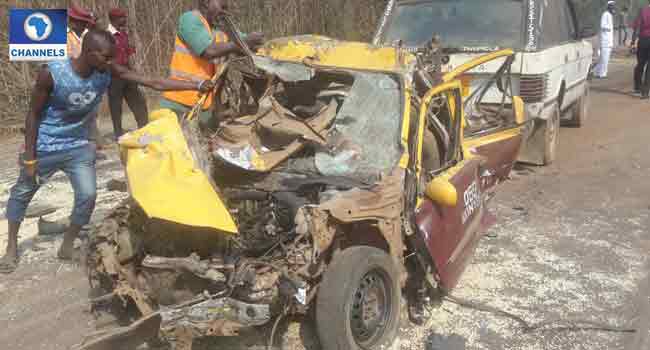 However, the driver of a truck with Registration Number JIGAWA GML 85XX, died along with his passenger. The truck had its head severed from its body and mangled beyond repairs, and so was the Micro cab.

Sector Commander of FRSC in the state, Mrs Alao, also attributed the accident to heavy fog and over speeding.

“The ones coming from behind did not know. They didn’t see the front and we can’t separate it from the fact that some of them were on top speed. They were speeding, so they couldn’t apply their brakes on time.

“Seven vehicles were involved, comprising four trailers, one bus and two small cars. Six people were injured and they were taken to the hospital while four people died, three male and one female.”

Victims of the accident were taken to the morgue of the State Hospital at Adeoyo, Ibadan, while the injured persons were taken to St. Patrick Hospital, Ibadan.

The FRSC boss said the accident could have been avoided and advised motorists to be careful while driving.

She added that “We always emphasised caution when driving. When you cannot see your front clearly, you should not speed such that if anything happens, you’ll be able to manoeuvre or apply your brake and stop before you hit what is in front of you.

“People should obey all rules and regulations and when the weather is not friendly.”